The “City of Sails” Pipe Band is based in Auckland and has a membership that is intergenerational and is open to interested persons of all ages and nationalities.

Individual tuition is freely given and the band practices, parades and competes together and members learn from these experiences, that giving their time to community activities is rewarding in its own right.

The City of Sails is both a competing and a social band and we are involved with the Pipe Band movement and with the community at many levels.

The band regularly attends the Provincial and National Competitions in Grade 4 and individual members are regularly competing at National and International events.

In 1992 a piper and a drummer met to discuss their views of the pipe band movement and their vision of what would make a great band.

Being two highly motivated individuals they didn’t just put their thoughts on the shelf for another day but drafted an organisational framework. They then set to the task of making contact with their friends and family, musicians who had retired from competition bands or were members of other bands, to share their vision and inspiration for a new band with different values and aspirations to the bands that were currently active in Auckland.

The “City of Sails Pipe Band” was then formed and registered as an incorporated society.

The new band attended its first competition at the Tauranga Square Day in August 1993, in grade 4 and its members paraded in a variety of kilts; many of which had been sourced from the now defunct Kaikohe Pipe Band.

With this sponsorship and with numerous fund raising events, the band was able to fund the purchase of uniforms and the first major decision of this, being the selection of its signature tartan.

After much research and debate the band was able to settle on the distinctive “Red Gordon Tartan” after finding another new band in Auckland had already placed an order for the band’s first choice – the “Lindsay Tartan”.

In keeping with a key drive of the band to be a leader, the latest chanters and drums were then purchased from Scotland.

In March 1994 the band competed at its first national contest; in Tauranga, where it placed 3rd in Grade 4.  This was quite an achievement for the band after such a short time of playing together and the band’s reputation and its playing numbers grew rapidly.

The band’s performance that day was special but controversial as bringing innovation to the conservative national contest saw it compete under the threat of disqualification.

Fortunately the risky decision to step from traditional practices proved successful and the resulting decisive win resulted in the band being promoted to Grade 3.

With success came further recognition and playing membership swelled.  The band went on to compete at the national level in 1996, 1998, and 2001, the Australian Nationals in 1996 and travelled to play at competitions in Alaska in 2000.

In 1998 the playing numbers reached 27, with 18 pipers and 9 drummers.  Although the band was grade 3, it was able to boast that 17 of its playing number had previously competed at the highest level both locally and internationally.

Whilst this raised the standards for the band, the high number of talented musicians proved a double-edged sword and 1999 the size of the band shrank with the departure of a number of musicians taking advantage of overseas work opportunities in Australia, Japan and Sweden and others moving cities nationally. Two other members left to lead other bands in Auckland.

For a number of years, the band has been fortunate to be lead at national contests by the irrepressible Drum Major Brian Wilson MBE (a resident of Ireland).

Brian is a former Senior World Champion and has been active in Drum Majoring, both competing and teaching, for a long number of years. Many a crowd has been in awe with Brian’s presence, deportment, and performance.

The City of Sails Pipe Band has a large membership that is inter-generational and is open to interested persons of all ages and nationalities.

Individual tuition is freely given and the band practices, parades and competes together and members learn from these experiences that giving their time to community activities is rewarding in its own right.

The bands key objectives are shown elsewhere and whilst the objectives include fostering an interest in Scottish Culture in all its aspects, it does not limit itself to only participating in Scottish Highland Games and celebrations.

The band as a whole enjoys the opportunity of playing at a diverse range of functions including Indian Weddings, fundraising performances for the Red Cross (after the Christchurch earthquake), fundraising for the Lorna Coombes Foundation, University Capping Parades, Anzac Day memorial parades, multi-cultural days and the yearly Christmas “Santa” parades.

During an average year the band may play at 30 or more events with individual members and smaller – mini bands playing at a considerable number of other public and private functions.

2017 was an important year for the band being the 25th anniversary of its incorporation.

In 2011, with a stable band membership and under Kerry’s direction, and assistance from  noted players eg Scott Nicholson – a talented A grade piper and Grade 1 Pipe Major; there was a significant lifting of the ability of the band with improved musicality and introduction of the mental focus and technical techniques that Grade 1 bands use. This paid dividends at the national competition in Tauranga 2012 when the band achieved an overall third in the medley and set and first in the street march in grade 4b.

The City of Sails has a strong and dedicated membership and whilst membership may ebb in other groups the band has grown in its 25-year life because of its great leadership, strong family orientation, high levels of commitment, the fostering of confidence in learners  and the friendliness of its members, that keeps people involved …ask anyone that is presently or has been involved with the band.

What became of the two who had the vision?  Kerry Ballantyne is actively playing with the band and has been the pipe major since the band inception and in 2019 became NZ’s longest serving Pipe Major. Warren Ross, who was the inaugural drum sergeant, has hung up the sticks due to ill health, but retains his interest in the band and attends many of the bands appearances and competitions.

The Vision and Objectives of the City of Sails Pipe Band

The late Bill Wolfreys was a member of the band from  1994-2004.
He heard the band playing one day at the Target Road Primary School in  Sunnynook and he came across and introduced himself.
He had learnt to play in his childhood with the Ashburton Pipe Band and after a lot of hard work he mastered the art again and was an invaluable member of the band.
He took on the role of secretary in 1995 till 2002.
He and his wife Colleen retired to Matamata in 2003 but Bill still attended some of the practices and played out with the band.
His untimely death at the age of 64years gave the band the privilege to farewell a loyal member in style.
Colleen Wolfreys kindly loaned to the band Bill’s pipes and also suggested an award.
She gave a log of Elm Tree Wood that Bill had been drying for 3 years to ”make something with”.
Peter Ferguson, President, crafted it into a trophy, with the Clan McLauglan tartan and badge.
It was first awarded in 2005.

To annually recognise a bandsperson who demonstrates commitment and service to the band.
It is not a playing ability award.
It is determined by the Pipe Major in conjunction with a majority from the committee. 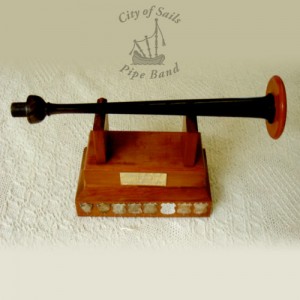 As part of the band’s philosophy to promote music excellence and to encourage its pipers, it was decided to award an annual trophy.
At the first annual dinner in 1993 this trophy was awarded.
Kerry Ballantyne ( inaugural Pipe Major) mounted the chanter from his first set of bagpipes to craft the trophy.
The chanter was broken by doing what every piper has been told not to do” ie. twisting the chanter from the bottom to free it from the stock.
Maybe the trophy serves as a reminder of that too.

An annual award in recognition of a pipers improved playing ability.
This is determined by the Pipe Major. 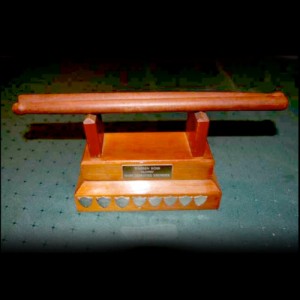 As part of the band’s philosophy to promote music excellence and to encourage its drummers, it was decided to award an annual trophy.
At the first annual dinner in 1993 this trophy was awarded.
The trophy was crafted by the band’s first Drum Sergeant, Warren Ross, and named in his honour.

In recognition of a drummers improved playing ability.
This is determined by the Drum Sergeant. 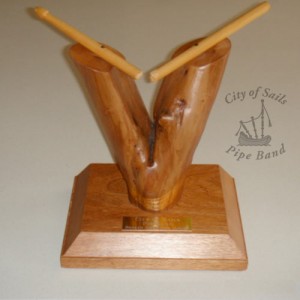 Warren Ross was the inaugural Drum Sergeant and had a very animated style of drumming. One evening at band practise, which was going really well, he hit the rim of the drum with the stick and the broken end flew off across the room into the other band members. Out of the hysterics and laughter, rose the idea to mount the broken drumstick for a trophy, to illustrate the fun, lighter aspects of band life.
It was awarded at the first annual dinner in 1993.
The initial trophy made by Warren Ross was lost, so Bill Wolfreys made a replacement and lathe-turned the “broken drumsticks”.

The criteria for this award is a band member who has done something “untoward”, humorous, forgetful or all three.
It is not a playing ability award.
It is determined by the committee. 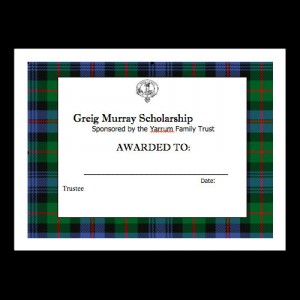 At the 2006 annual dinner hosted at Peter & Jane Murray’s home, Peter Murray on behalf of the Yarrum Family Trust donated $10,000 to the City of Sails Pipe Band. He highlighted the enjoyment his wife, Jane, and son, Kirk, got out of the band and the camaraderie that existed between band members. The trust recognised how tireless it was to raise sufficient funds to keep up with the increasing costs of running an efficient and effective band and yet still nurture band members.
It was suggested that prudent investment of the funds should yield sufficient interest for a scholarship to be awarded annually.
The certificate uses the Murray of Atholl tartan and crest.

A certificate and money ($ may vary) is awarded to a member to assist them in further tuition eg. private tuition, summer school, etc.
It can be awarded to a core, piping/drumming/drill, for tuition purposes.
It is determined by the committee with counsel from a Yarrum Family Trustee, if available. 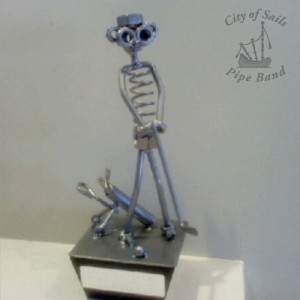 The title is a play on words of “Pitch & Putt”. Aptly named for pitch of the music and the nuts contained within the  trophy, also a lot of nutters likely to play for the trophy.
# is the music symbol for “ sharp”.
Inaugural golf tournament was at Mangawhai Golf Course, Sat Oct 31st 2009.
This trophy is hotly contested and there has been a few incidents that would be frowned on by the PGA during this event!!!